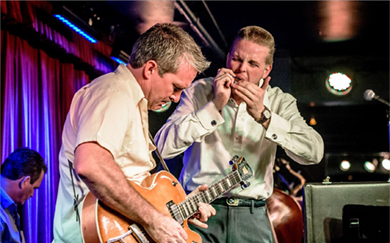 Multi-instrumentalist/singer/songwriter and young hometown blues hero Kyle Rowland returns from a summer of touring the US for his long-awaited CD release party. "Live On Tape!" was partially recorded at Momo on a reel to reel tape deck.Starring Kyle on harp, guitar and lead vocals, Sacramento Blues Hall of Fame Member Jimmy Morello (drums), Sacramento Blues Hall of Fame Kenny Marchese (guitar) and Greg Roberts (bass). "He plays harp like they used to play, not all high on nitrous oxide, but like a man." - Charlie Baty (Little Charlie & The Nightcats) "The blues ain't black. white, yellow, purple, red --its a feeling, and this boy has it! " - James Cotton "Kyle can bend notes with the best of them….. He commands the stage like an experienced bandleader. He cues the band, perfectly, banters with the audience, makes sure a well-played solo gets acknowledged….Even more than his connection with a harmonica, Kyle radiates a joy of playing music he obviously loves." - Michael Shea, Guitar International Keeping the tradition alive and sticking with the roots, The Kyle Rowland Blues Band dishes out a sauté of boisterous Chicago and swampy Texas blues with a pinch of West Coast swing. Danceable and listenable this show will have you wanting more with your toes tapping into the next morning. His playing exudes genuineness- as if he pains over each blues note from his harmonica, and deeply feels each lyric in his songbook. With a backing band of veteran musicians, The Kyle Rowland Blues Band brings freshness to the blues scene! "Blues harmonica player of the year" and "Blues New Artist of The Year" in 2009 from the West Coast Blues Hall of Fame, Kyle Rowland, has been dominating the stage since the tender age of 10 years old. Kyle quickly and naturally developed his own sound. With the help from a few of his heroes such as James Cotton, Hubert Sumlin, and "Matt Guitar" Murphy along with many other, Kyle learned specific techniques of stage presence, the music business, along with highly revered harmonica secrets.