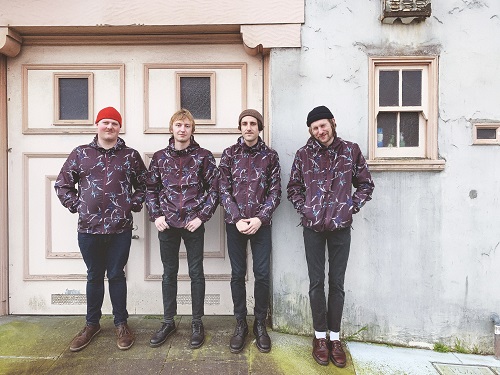 “Back when I was young and trying to fit in with the cool kids at my high school, I thought being edgy and mysterious would lead me down the path to stardom. My ma, bless her heart, took me down to the local craft store and I bought some patches, a sewing kit and puffy paint. On our way home, I saw a guitar lying next to an old mattress and other discarded house-type items. I fell in love that day and never looked back. I brought that guitar to school for the rest of the semester. Never learned to play, no one ever paid attention to me and I sure as hell never got cool, but hot damn a baby was born outta me and I think I’m callin’ it Bear Call.”

Pregnant is the musical pipe works of once described hillbilly savant Daniel Trudeau, an intriguing producer, visual artist, musician, and father hailing from the Sierra Nevada Foothills of Northern California. Pairing a sweet vocal style reminiscent of Neil Young with a swelling collage of electronics, foot pedals, guitars and even saxophone, Pregnant’s whimsical and DIY vibes are dream-worthy. Raising a family in Placerville, CA brings inspiration to the all aspects of his music, as the lyrics and instrumentation work together to capture a feeling of modern isolation, personal struggle, and self-discovery. After a rapid succession of limited edition releases that helped refine and perfect his sound, Pregnant's Mush debut, Life Hard : I Try fulfills the promise of his earlier work without losing any of the risk-taking genre mixing that makes his music so unique. Pregnant's willingness to combine traditional songwriting, pure vocals, and warped experimentation mark him as an act to watch.